Asked whether a woman could legally get an abortion in case she got pregnant from a rape, Republican Todd Akin – a Senatorial candidate for Missouri – gave this humdinger of an answer:

From what I understand from doctors, that’s really rare. If it’s a legitimate rape, the female body has ways to try to shut that whole thing down. But let’s assume that maybe that didn’t work or something. I think there should be some punishment. But the punishment ought to be of the rapist, and not attacking the child.

The stupidity is mind-boggling. Let’s break that down.

First of all, pregnancy from rape is no rarer than pregnancy from any other kind of unprotected sex, vanilla or the Christian Grey variety. Atkin goes on to explain why it would be rare.

If it’s a legitimate rape, the female body has ways to try to shut that whole thing down.

I have no idea where this bizarre notion comes from, although I would not necessarily discount fringe religious beliefs as a possible source. As far as I know – and I believe I’m standing on pretty solid ground here – the body has no means of knowing whether it was raped, much less have the ability to refuse to get pregnant if it determines that it was raped. That whole concept sounds more like a mutant superpower to me, than actual medical science.

But Akin’s logic – while resoundingly moronic – is also quite predictable, given his Conservative leaning. Ultimately, he is saying that the preservation of a human life – the baby’s – is more important than the psychological and physical well-being of the victim.

Sad to say, this is essentially the same position adopted by the Roman Catholic Church in the Philippines. In this predominantly Catholic country, where even the erroneous belief that abortion is supported by a bill can lead to that bill being stonewalled for close to two decades, any proposed policy or law that seeks to give a woman a choice to terminate a pregnancy arising from rape would be killed within days and its proponents, tarred and feathered. Of course, this doesn’t mean that abortion doesn’t exist in the country. It does, and it probably kills as many desperate mothers as it does fetuses.

This fact alone – that unregulated abortions are fatally carried out despite its illegality – should make the issue of a woman’s right to terminate a pregnancy resulting from a rape serious enough to warrant mature discussion and consideration. Political realities however, will ensure that no such discussions will ever take place. Is it any wonder then, that the Reproductive Health Bill is taking forever to pass? The citizens of Missouri are fortunate that Akin opened his mouth and spouted that drivel. At least now, he’s being pressured to quit the race.

Here, at home, we’re not quite so fortunate. We may not have Todd Akin, but we certainly have more than enough of his ideological twins standing in the way of better healthcare for women. 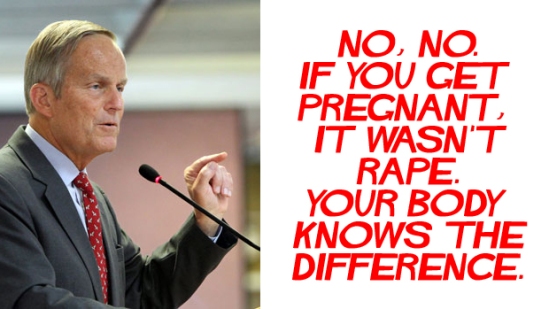 Funny how people sometimes tend to burn themselves and their allies in their overweening desire to push every advantage to the limit. Funnier too how people who’ve been lambasting Sotto for plagiarism have suddenly tacked differently in the last few hours. Gone are most of the vicious tweets, to be replaced with affirmations of the pretty Senator.

It’s sad really, that Cayetano is now being challenged to prove that she isn’t cut from the same cloth as Sotto, but if it is true that she joined the chorus against the man, then I guess she has no choice except to face the music herself. For the record, I think that in both cases, the plagiarism angle seriously distracts from the more important aspects of their respective positions. She, health and so on; he, the fact that the Pill has harmful effects which cannot be lightly brushed aside by adherents of a bill which, if passed into law, would essentially promote its use. For crying out loud, meds have been taken off the market for less evidence of harmful side effects than the evidence available for the Pill’s known dangers.

I suggest we get over it. If the plagiarism of these two Senators rankles too much, then just don’t vote for them the next time. For now, though, opponents of the RH bill should just focus their efforts on attempting to water down the bill with amendments, and proponents should just keep calm and carry on.

So THAT’S why you’ve been promoting that  restaurant on Bonifacio High Street so tirelessly, you snarky devil, you. LOL 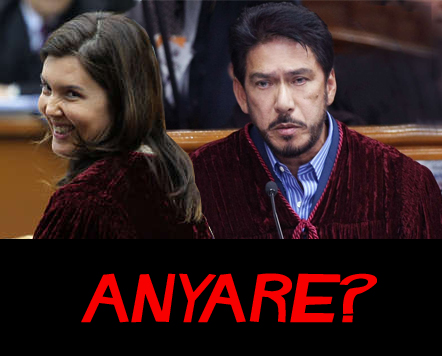 I’m for the RH bill. Let’s get that straight. And no, I’m not Sotto’s whore either. But this whole business about plagiarism is just being capitalized on so shamelessly by some quarters that it’s gotten too ridiculous for comfort.

Obviously, plagiarism is a serious issue, and Sotto should be taken to task for that. But did he really take Pope out of context? This interview belies that notion, despite the interviewer’s determined attempts to get Pope to express support for the RH bill.

The people pushing this interview have, so far as I know, not released a transcript. So, I did a little transcribing of my own.

Noemi Dado – The purpose of writing your article was the harmful effect of chemicals on the gut, but not to discourage the use of the pill, am I right?

Sarah Pope – Well, yes, it’s to discoura- let me, let me clarify. I’ve never used the pill myself, nor will I ever use it. I try to avoid drugs as much as possible. But the effects of the pill are very similar to the effect of antibiotics on the gut. They’re very similar. So, but we’re not go throw away antibiotics are we?

Sarah Pope: Are we gonna get rid of antibiotics because there are side effects? No. They’re useful in certain instances, the same with the pill. I want women to understand that there’s health problems with regard to the pill and to be aware of that before they take– don’t take them lightly, do you know what I mean? Don’t just take them because it’s convenient, because it’s easy. You need to really think about it. And think about you’re situation before you take the pill. But if it wor– if it makes sense for you, any downside is outweighed by the benefit to you taking it, then yeah, of course, go ahead and take it.

Dado opened with a leading question and was promptly corrected. Of course, you could see Pope’s hesitation to say that she was discouraging the pill so she quickly launched into a clarification which gave the same net result: she doesn’t believe in the pill, but hell, if you do, then go right ahead.

Does this square with Sotto’s position? I don’t exactly know, but it sounds remarkably similar. As far as I know, Sotto hasn’t been agitating to outlaw the pill, only that he’s against a proposed measure that would promote policies that are “detrimental to the health of a pregnant mother and puts the life of the unborn on the line.”

To say that Sotto took Pope out of context would mean that Pope was FOR the pill, but that Sotto had used her words to say otherwise. This was Dado’s hoped for answer with that leading question of hers. Pope, however, was very clear. She too was against the use of the pill, but would not stand in anyone’s way if they wanted to use it. Kinda like not pushing for a ban, but opposing a move to promote the pill? She’s more Sotto-ish than she might want to admit.

But Dado doesn’t accept that. So she asks:

Noemi Dado – How do you feel that your blog entry was taken out of context and used against the reproductive health rights of women?

Sarah Pope: Well, you know, I think it was very presumptuous of Senator Sotto’s staff to take, you know, material and to twist it for their own personal agenda. That’s probably why they didn’t ask permission – it’s probably one of the reasons they didn’t ask for permission because they probably wouldn’t have gotten it. I don’t want my information to be used for political gain. I want it to go out to the women, to have them use it for their own personal benefit, but not in a political way, that’s not the intention of my blog. It’s not a political blog. It’s a health blog!

Pope quickly pivots to the issue of unattributed and unauthorized use of her material, neatly dodging the “context” issue which she had already responded to. Correctly, in my opinion, she underscores the essentially neutral nature of her material – that it should be used for personal decision making, not political maneuvering.

At this point, I wondered if she wasn’t cringing internally since she – not her material – was precisely being politicized at this point.

Noemi Dado – What do you feel now about the reproductive health stand of our women here?

Sarah Pope – Well, you know I’m not well-versed with what the, you know, situation is over there, I’m not a Filipino. So I’m not really- you know, what my opinion is of the bill, and women’s rights, and what’s going on in the Philippines — I don’t live there, I’ve never even visited the Philippines, so I’m not sure my opinion would be of any value whatsoever.

Of course, Dado refuses to take that as an indication that Pope is trying to stay out of the fray – except of course for the plagiarism issue – so she hits the blogger with a blurb she had given earlier:

“Women of the Philippines: I am terribly sorry my blog was used and twisted against you. You deserve the choice to use The Pill if you want or need to based on your particular circumstances.”

And snuck in this comment: “It went against the speech of Senator Sotto,” which Pope again conveniently ignored. However, by this point in the interview, Pope was ready to wale on Sotto for being a plagiarist; against which I have absolutely no objections.

So what was the point of the interview?

From Dado’s point of view, it’s pretty clear that she wanted Pope to endorse the RH Bill. Of course, considering Pope’s works, she would have been unlikely to come out in defense of the pill. I wonder why Dado missed that.

From Pope’s point of view on the other hand, the woman clearly was more concerned with the theft of her work, especially since she took great pains to stick to motherhood sentiments about how women should be given a choice to use the pill or not.

Like I said at the top, I am for the RH Bill. But in my support of that measure, I’m not quite so desperate as to try so determinedly to make it appear that this foreign woman is on our side. That is unfair to her and just poor form for us. What Sotto did was terrible, and he should be made to pay for it electorally. Don’t ever vote for him if he runs again, even if only for Quezon City councilor. But be that as it may, I think the quote did establish a solid foundation for his arguments such as they were.

In fact, I have not heard RH bill advocates go into any great detail about the detrimental effects of using the pill, except only to say that the pill should be used only upon proper consultation with a physician. If Sotto was pointing out that that strategy is misleading, well, that’s his opinion. Advocates of the Bill, however, must acknowledge that his opinion is not his alone and that the cause would be greatly benefited by addressing his points directly, rather than dwelling on collateral issues and, ultimately, being more popish than Pope.

Error: Twitter did not respond. Please wait a few minutes and refresh this page.